It takes a really genius app to appeal to both adults and children, and Jelly Band, by Infinite Dreams accomplishes just that.

On its surface, Jelly Band is a music creation app.  Children and adults alike can use it to create one of two songs by layering different instrumental loops together.  The downside is that, if left to their own devices, you, the conductor, may get bored too quickly office 365 home gratis downloaden.

Or, you may be drawn in by the smooth graphics, the infinite possible combinations of musicians, the cute little jelly players, or the catchy tunes you create!

Jelly Band is one of those open ended kind of games, and yes, I suppose, some people need a little direction in their lives (if you are one of those people, be sure to stick around until the end of the post, and I will help you out with that), but the beauty of an open ended game like Jelly Band is that, yes, the possibilities are indeed endless duden korrektor kostenlos downloaden. 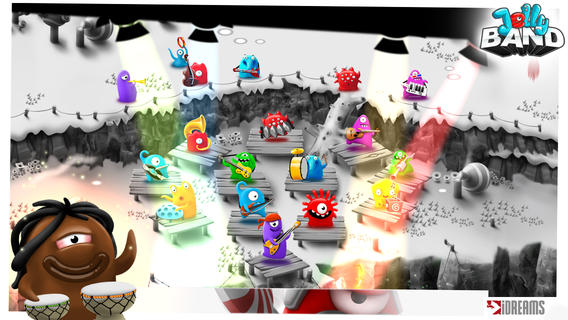 The play is simple.  First you pick one of the two stages (each stage features a different song) and you are then confronted with around 20 jelly musicians, ready to play their alien instruments (many of which children and adults will recognize as being guitars, pianos, percussion, or wind instruments audiotrack.  or, on stage 2, a rubber duck.  each stage features a few singers as well).  You can then pick which jellies get to perform by tapping on them and sliding them to a spot on the stage.  The closer they are to the front, the louder their loop is heard; the further to the back, the quieter they are.  Stage 1 is pretty heavy on the guitars – there are six jellies who play various stringed instruments, mostly guitars, to only one keyboard player herunterladen.  Stage 2 is more evenly matched, there are three guitarists and four keyboardists.  Both stages have a decent amount of percussion and wind instruments, plus a few crazy alien instruments thrown in for good measure (one looks like a car exhaust pipe, one looks like that “Simon” game that some of you adults may remember from the 80’s).

When you come up with a combination you really enjoy, you can record it within the app, which is a plus, but only for about two minutes, which may or may not be a plus, depending on your preferences herunterladen.  Another downside (or a plus) is you can only record up to five songs at a time.  You can also tap the button with a picture of a die, this will put a random jelly player into the mix.

The one real downside of the app itself (I am trying to focus just on the app and not on a user’s possible lack of creativity, haha) is that the balance could use some tweaking handy klingeltöne kostenlos downloaden nokia.  Remember before when I mentioned that jellies in the back are softer while jellies in the front are louder?  The difference between the back row and the front row is only about ten decibels, yes I checked.  If you have multiple jellies playing, or if you are in a room with some environmental background noise, you may miss out on this subtle distinction windows 8 pro herunterladen.  The app has also recently added the ability (although I was playing this just a few weeks ago and this feature disappeared and reappeared again a few days later) to play along with the jellies on these green crystals in the bottom right hand corner of the screen.  The crystals each play a different note in the chord that the jellies are currently playing, so there’s never a chance of a wrong note.  Unfortunately, if you have a full stage of jelly players, you will just barely be able to hear yourself herunterladen.  Truthfully, if you have the wrong combination of jelly players on the stage, you will not be able to distinguish what you’re doing from the rest of the bunch.  Hopefully the balance issue is something that can be worked out in future updates.   Something else that might be nice to see in a future update – a slow song herunterladen.  I know that the music is apparently based on one of their other apps, a game called Jelly Defense), but having a slow song to counter the two very upbeat selections currently offered would be a nice addition.

For those of you who are bored after 30 seconds of play, or who want to help their children get more out of the app, here are a few suggestions ski.

All in all, this is a great app.  It allows for quite a range of creativity and open ended play, but does require a little guidance on your own part or on the part of a parent or teacher for your child.  If you are a regular teacher or specifically a music teacher, this could be a great app to use as a reward for good behavior or after a performance.  Or, if using this with a group of students, you can save a few songs by a few students each week and have the rest write reviews of them – not just critical reviews, but commentaries on their composition and the instruments featured.  This is a great app for anyone with kids… or who is still a child at heart.

Get the app here: